Call off your dogs. Let's talk.

July 12th is traditionally ‘Orangemen’s Day’ in Northern Ireland, in the cities of Scotland, and anywhere else where there is a significant Northern Irish Protestant diaspora. 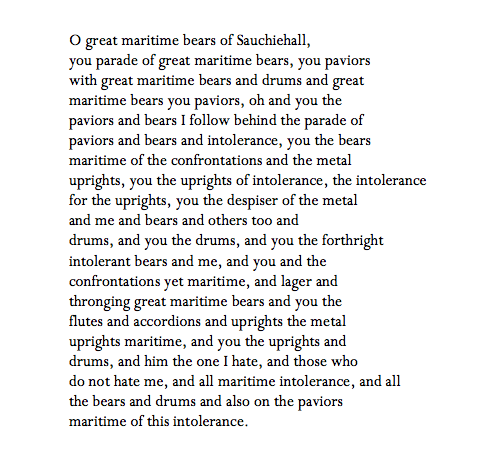 In 2008 I took part in a competitive project to emulate the work of one of a selection of modern poets. I chose Lisa Jarnot’s Ye White Antarctic Birds. I set out by studying the poem in depth, in particular her repetitive use of a very small selection of words, and the way in which that allowed a single metaphor to build, develop, and spiral. Her poem satirises the white-shirted and white-bloused, busy, caffeine-fuelled denizens of one of NY’s wealthiest districts. I chose to use exactly the same construction as Jarnot’s original, but transposed it to another city – Glasgow in Scotland – and to satirise another particular group, whilst retaining the American character of the poem. In the case of the poem above, the group satirised are the annual Orange Day marchers.

Although the event itself is markedly sectarian, I have to state that I have no axe to grind either way. I had to pick a subject, and the Orangemen were it!

In 2012, the poem was selected for inclusion in the magazine Qarrtsiluni. If you click here you can hear the poem read aloud.